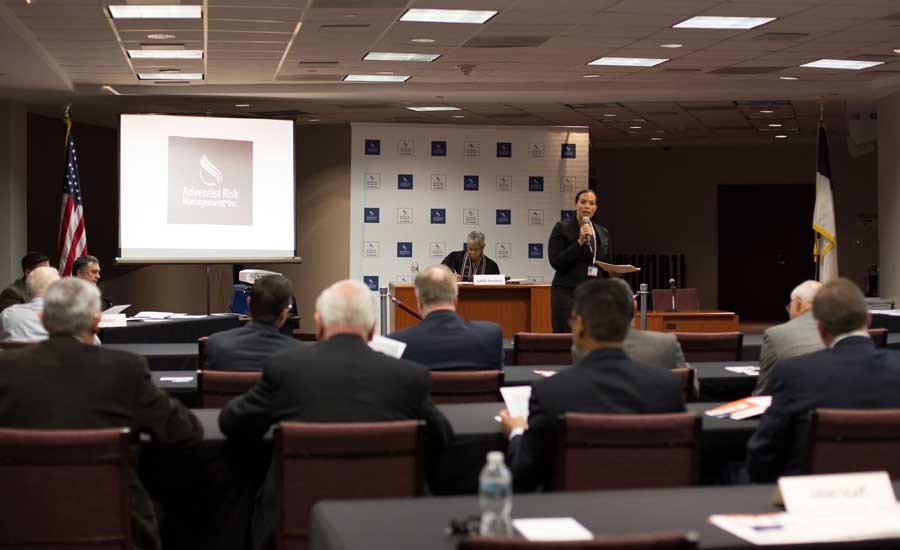 Silver Spring, Md. October 26, 2016 – North American Division (NAD) leaders were given the opportunity to be part of a mock trial at the annual NAD Presidents’ Symposium on Wednesday, October 26.

The annual event, sponsored by Adventist Risk Management, Inc. (ARM), is a risk management training session for all NAD presidents. Each year, the Symposium discusses the most recent risks Adventist ministries are facing.

This year attending presidents served as jury members during a mock trial created by ARM. The mock trial discussed a hypothetical lawsuit involving an Adventist elementary school teacher who was terminated for her inability to effectively communicate with parents and for an incident of corporal punishment among other allegations. The fictional teacher sued the fictitious conference claiming gender discrimination and retaliation.

Following the mock trial, the attending presidents were asked to discuss the witnesses’ testimonies and the presented evidence in order to decide if the fired teacher should receive compensation, including a jury awarded settlement for emotional distress.

“We wanted to give our church leaders a firsthand look at the legal issues that today’s church can encounter,” said Tim Northrop, ARM president and CEO. “This mock trial allowed the attending presidents to take part in the decision-making process that a jury faces, and provided them with more knowledge and experience for the next time they deal with lawsuits.”

Retired judge Judith Hawkins held court for the mock trial and concluded the exercise with an appeal to the attendees to be proactive in their legal preparation for potential lawsuits and in risk management practices. She especially emphasized the importance of getting rid of 15-passenger vans in the conferences, one of the risk management initiatives for NAD in 2017.

“It was very interactive and engaging,” said Leslie Louis, Carolina Conference president. “The topics were excellent and very practical, meeting us where we deal with issues.”

Adventist Risk Management, Inc. is the risk management company for the Seventh-day Adventist Church. We provide risk management services and insurance product solutions to assist the Church in eliminating oversights that can lead to costly accidents. ARM has its corporate headquarters in Silver Spring, MD, and satellite offices in Riverside, CA, St. Albans, England and Brasília, Brazil. Please contact David Fournier at (301) 453 - 6922 for more information. Please visit our website at www.adventistrisk.org. We also invite you to join us on Twitter, Facebook and Instagram